Ben Gilroy and the Far-Right.

It has been revealed that Meath-East by-election candidate and leader of Direct Democracy Ireland (DDI), Ben Gilroy has links with the far-right. 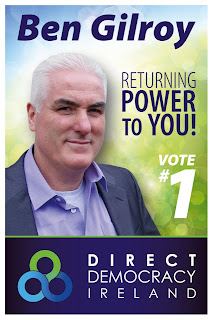 I won't go into detail about who DDI are as I have already done that on a previous post on this blog. In that post I made the assertion that DDI is most likely secretly right wing and they claim to be "neither right-wing or left-wing" to appeal to a wider voter base. I also alluded to the how they play on nationalist sentiment in terms of imagery and rhetoric and how this can be dangerous if we do not know what they really stand for beyond direct democracy.


Well today a friend of mine discovered some information that connects Gilroy and his tinfoil hat wearing friends to far-right bigots both in the UK and here in Ireland.

In a Tweet from Gilroy on the 28th of October 2012 he links a video of UK Independence Party leader and President of the Europe of Freedom and Democracy EU group Nigel Farage MEP speaking in the European Parliament. Gilroy comments with the video "The man calls it like he sees it. I have limitless time for people like that".

He since has sent a number of other supportive Tweets about Farage. 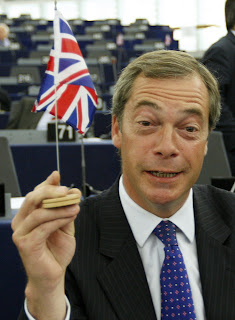 The Europe of Freedom and Democracy (EFD) are not a friendly, pro-democracy group. They are not liberal or progressive in any sense. They are far-right, conservative bigots with bags of crazy thrown in. They are the political expression of Europe's suited fascists. People who weren't masculine enough for the boot boy culture of Nazi parties like Golden Dawn or the BNP but were also too radical in their racism for the main Conservative parties such as the Tories. They have now become the main 'Euro-skeptic' politicians in Europe but also hold bizarre views such as climate change being a liberal myth, multiculturalism causing economic crises and the next biggest threat to Europe is going to be Islam. Nobody should be giving this crowd an ounce of credibility.

The last three EU treaties in Ireland the EFD have used EU money to send every Irish house a leaflet to urge a No Vote. Half of the leaflet contained genuine reasons for people to reject the various treaties but the other half was taken up with racist nonsense about the horrors of Turkey joining the EU. An image of Europe being taken over by Islamic imagery was their picture of choice. The leaflet spoke about how the treaty was bad for 'Native Irish people' because a foreigner could take your job.

The EFD contains UKIP, The Slovak National Party, The Lithuanian Order and Justice party, The Danish Peoples Party, the Finnish 'True Finns' and up until recently Geert Wilders' radical-right Dutch 'Party for Freedom'. Other countries have MEPs in this group too. All of these organisations are anti-immigrant, anti-Muslim, anti-worker, pro-capitalist, anti-gay, nationalist, Pro-Life (or anti-choice) and most of them are Christian fundamentalist parties. Most of these groups harp on about the 'Sovereignty' of their nation and the need for direct democracy also.

You can see UKIP's take on direct democracy here: http://www.ukip.org/content/leading-articles/1336-why-we-need-direct-democracy

As I mentioned in my last blog post Gilroy is well known to be part of the Freemen of Ireland Movement. The constitutional conspiracy theorists. Their radio station, Tir Na Saor, (which Gilroy and others from DDI have been on numerous times) interviewed the UKIP MEP Godfry Bloom in March 2010. They kept him on for ten minutes and did not criticise him once for any of his parties policies. You can listen to that interview here: http://www.youtube.com/watch?v=q2DUyeZDInI

Also the Cornwall branch of UKIP include a video of Ben Gilroy on their blog. They rarely talk about Ireland but when they do direct democracy is always thrown in and in this case Gilroy is mentioned directly. You can see this here: htmlhttp://ukipcornwallnews.blogspot.ie/2012/04/news-snippets-5th-april-2012.html

Below is a picture of Ben Gilroy sitting on stage, near Micky Harte of the GAA and Pro-Life Campaign, at the support rally for Sean Quinn. Quinn is a crooked business man who owes the state hundreds of millions. Why would somebody support this man? 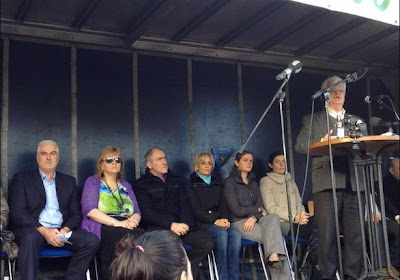 At the official launch of Direct Democracy Ireland, Clare Leonard, DDI financial spokesperson, made a speech in which she said "We now live in a society where if you are a rich banker you get a bailout, if you are poor you get a hand out". Clearly hitting a blow to the unemployed, whipping up prejudice against the working class, Daily Mail style. This is DDI's attempt to appeal to the business class. On reading the transcripts of the DDI launch it is clear that they are a very pro-business/entrepreneur party. You can Leonard's speech here: http://directdemocracyireland.ie/wp-content/uploads/2013/02/Clare-Leonard.pdf

In the 2011 general elections a candidate by the name of Jane Murphy ran in Dublin South as a member of the Christian Solidarity Party. She ran on the usual CSP platform of bringing back catholic values to Ireland but she also added in something interesting. Half of her main election leaflet was dedicated to the idea of direct democracy. Now you can share the opinion that direct democracy should be how society is organised and not be associated to Gilroy but the thing is the website address on her leaflet is the same domain as Direct Democracy Ireland: formerly directdemocracy.ie but now directdemocracyireland.ie. Same URL domain. Same rhetoric and similar branding too.


As I discussed in my last blog post the founder of DDI, Raymond Whithead, is a mini-capitalist looking to venture on a new project. In various videos Whithead limits his contributions to discussing the Swiss system of democracy and a small bit about his personal life. However he fails to mention that he is a stern Pro-Lifer (Anti-Choicer). Before he ran in the 2011 general elections, Whithead signed a Pro-Life agreement with the European Life Network to say that he was fully opposed to all access to abortion. You can see this here: http://europeanlifenetwork.blogspot.ie/2011/02/irish-general-election-candidates.html

So it is becoming increasingly obvious that Direct Democracy Ireland are secret right-wingers and my questions around why they do not discuss workers' rights, economic democracy or the Democratic Program of the First Dail are more or less answered.

Even if all of the above information happens to be a coincidence the point still stands: A political party that does not clearly situate itself on the political compass is open to support from anyone and infiltration from anyone. It is also open to speculation from individuals like myself that you may actually be something other than what you say you are. If you do not have principled positions of key issues it can lead your movement anywhere, including dangerous places.

In the upcoming by-election in Meath East I urge people to stay well away from voting for Ben Gilroy no matter how charismatic he may be. People give characters like Farage credibility because of their charisma and the few decent points they might make about EU democracy and austerity but consistency is key and you never know what people are not telling you about themselves.

It will be interesting to see how people vote in this election and whether Gilroy's money can give him a boost in the polls or not.

We don't need big mouths or show men we need real fighters, with principles that make it clear what they stand for and know what ordinary people want. 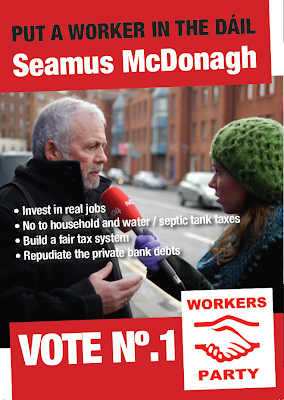